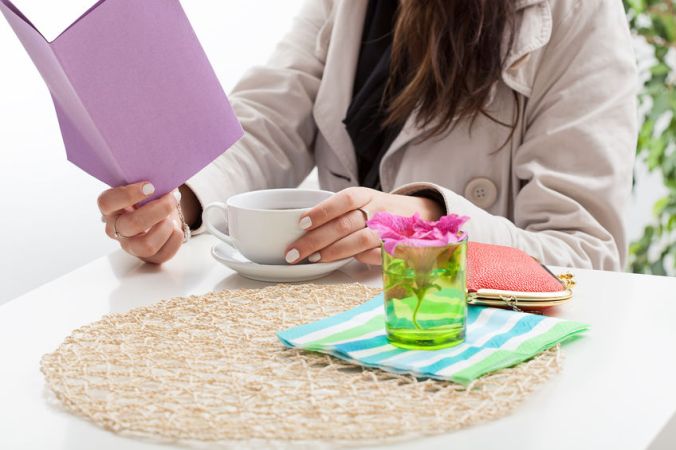 Confession: I eat out alone. Often.

Yes, I have friends, and I like (most) human beings. However, I also travel by myself a lot and run plenty of errands on my own. If I’m hungry, I’ll want to take myself to an eatery as soon as possible.

Whether at a food court or in a “fast casual” restaurant, dining solo has never bothered me. It’s a way for me to escape life’s trivialities and enjoy the food that I want at my own leisure.

I know several individuals who have curled their faces in disgust when I suggested the idea of eating alone in public. “Nope, I could never do that, I’d feel like a freak,” they’d proclaim. For them, eating out is strictly a social event, be it a catch-up brunch with girlfriends or a business dinner with stakeholders. (Mmmm, steak.)

What the detractors may not know, however, is that dining solo is a very common activity these days. Per data from online reservation service OpenTable, there has been a 62 percent rise in “party of one” bookings nationwide, with most growth occurring in major metropolitan areas such as Dallas, New York, Philadelphia, and Chicago.

The next time hunger calls whilst you’re out-and-about on your own, consider these five perks of dining solo:

1. You Can Eat What You Want

If your culinary tastes clash with the palates of your friend circle, you’ll often find yourself compromising when it comes to dining out in order to accommodate everyone’s preferences. It’s not a bad thing, but there will come a point when you don’t want to settle for something you don’t want for the sake of appeasing others. When you dine alone, you only have your tastes to consider. No need to compromise here — eat whatever your little hungry heart desires!

2. You Can Dine on Your Time

Dining with others means dining on separate schedules. Maybe you want dessert but your dinner guest is dropping hints that she’d rather grab the check and call it a night. You can either pass on the extra course out of respect for your friend’s wishes, or order that slice of pie you’re craving but not fully enjoy it because you feel rushed and guilty. When you eat out alone, you’re on your schedule…granted the server isn’t trying to hustle you out. (“Here’s the check so whenever you’re ready…are you ready now?”)

3. No Problem Finding a Seat for One

Once, I hit up New York ramen hotspot Ippudo during a Friday lunch rush. I overheard the hostess telling the groups ahead of me that there would be a bit of a wait. When I declared that I was by myself, I was immediately taken to a lone seat at the communal table. Think of dining solo as an EZ-Pass for popular restaurants — you’ll usually have no trouble nabbing a spot, even during peak hours.

When I’m traveling, I’ll either have my Kindle or a magazine in my purse for that inevitable moment when I wind up at a restaurant alone. I’m also prone to just breaking out my phone and engrossing myself in the wide world of social media. Although some may consider phone-on-the-table a dining faux pas even if you’re dining alone, you don’t have to worry about looking rude in front of your non-existent guests. So go on — read that next chapter of your book, respond to those emails, send your mom a quick text to let her know you’re safe and sound and about to enjoy a delicious meal. It’s your time.

Word of advice: Be mindful of the waitstaff; the last thing they want is to deal with someone who is too rude to even acknowledge their presence. Maintain an awareness of what’s taking place around you.

Judging by the 22 million-plus posts tagged #foodie on Instagram, photographing food and posting it online has become a standard practice. (I’m guilty!) Unless you’re among like-minded company, chances are you’ll keep your phone tucked away, vowing to remember the meal in front of you by memory alone. If you’re feeling particularly blithe by yourself, however, grab a quick snap of the culinary marvel in front of you. Again, mind your surroundings. You’re not Austin Powers conducting a photo shoot — you’re simply trying to make your Instagram followers jealous. Sitting alone and overtly photographing your plate will guarantee crooked stares from other diners and restaurant staff.

See? There are plenty of benefits to eating out alone! However, it’s not always gravy:

In a Crowded Restaurant, It Can Get Lonely

As comfortable as I am to eat at restaurants alone, I’m not immune to pangs of loneliness when I’m surrounded by groups or couples enjoying their meals. There have been times when I was the only party of one in the place, and it brought upon a “You can’t sit with us!” vibe. Yeah, I made that choice to eat alone, but I also wanted to feel like I belonged there. I always get over it, usually when the food arrives at my table. These infrequent pangs haven’t stopped me from solo dining, nor should it stop you. If you ever find yourself in such a situation, just remember the benefits you’re reaping by not having to share a table with someone else.

Fortunately, there is one preventative measure you can take before you venture out in order to avoid that “forever alone” feeling. Search for “best restaurants to eat alone in [location]” and you’ll find several lists recommending solo diner-friendly establishments. These lists exist for most major cities. You can also peruse TripAdvisor or Yelp for establishments tagged as ideal for solo dining.

The experiences I’ve had as a solo diner have enriched me. Aside from trying all sorts of delicious food, I’ve also become much more secure in my independence. One lesson I’ve learned through years of solo dining is that being alone doesn’t always equate to being lonely. Humans are social creatures, but having that “me-time” is so satisfying (and necessary), even if it’s in public.

Don’t deny yourself the opportunity to try something you really want. Open yourself up to the benefits of eating alone. Go ahead and book that table for one — chances are you’ll be seated right away.

Are you comfortable with dining solo? If so, what tips do you have to share? If not, what’s holding you back? Share your wisdom in the comments below.

2 thoughts on “Table for One: 5 Perks of Dining Solo”