Apologies to The Simpsons.

I repeated the above mantra to myself for most of December.

The last several weeks haven’t been kind to me, and I haven’t shown my best self throughout most of them, either. Based on those events, I had convinced myself that 2015 was a dud.

After I took the time to reflect on the year that was, I realized that I was being, for lack of a better term, idiotic. Sure, I’ve hit a bit of a rough patch, but overall? This has been a year that was all too kind to me.

So what positive things happened for me in 2015? Let’s take it from the top:

I kicked off the year in Dublin with a low-key celebration and many yummy treats, like bacon-wrapped hot dogs. (Eating pork on the first of the year is good luck…so I’m told.)

I also celebrated my 30th birthday in Ireland with a comedy show (David O’Doherty!) and a dinner with plenty of sake & sashimi.

The boyfriend and I took a short hop over to Glasgow in early January, where we managed to have as much fun as we could despite endless lashing rain and an emergency evacuation from The People’s Palace.

This was taken in The People’s Palace just as the fire alarm started blaring. Fun times!

I returned home to Philly mid-January, and from there focused much of my energy on getting back into the tang soo do groove.

After a long stretch of not attending hockey games, I went to two in one month!

First, I hopped on an Amtrak train to DC to celebrate my older brother’s birthday. We took in the Flyers-Capitals game at the Verizon Center. The Flyers won, and my brother’s special day wasn’t ruined.

About a week later, I joined my family for a Flyers home game at the Wells Fargo Center. We did it in style, with seats in a Club Box and a brief meet-and-greet with the President of the Flyers, Paul Holmgren. Sadly, that game had a less-than-desirable outcome, as the Flyers fell to the Columbus Blue Jackets 5-2. 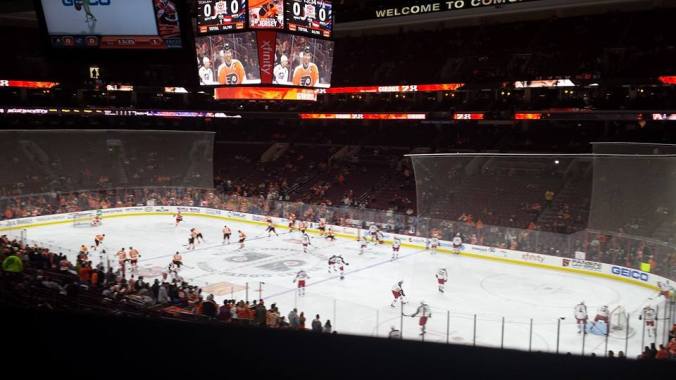 These seats took the sting out of losing, if only a little bit.

The end of the month was capped by another birthday — my mom’s. No hockey here, though. I made sure it was a relaxing day for her. (She deserved it.)

I earned my advanced red belt in tang soo do after doing the complicated Bassai form solo and by my own count. (I remember being a little wobbly, mostly from nerves, but I otherwise did fine.) 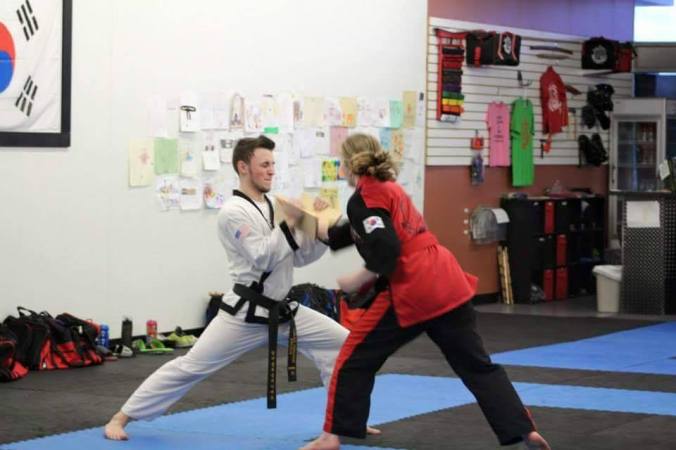 I also broke a board with a chop. Took a while to get the sting out.

Meanwhile, I completed another class for my hapkido certification. Our school does hapkido seminars every quarter. I haven’t been able to attend every one, but I’m glad I made the session in March. My goal is for hapkido to become as natural to me as tang soo do is. I know it’ll all come with practice.

April was one of my favorite months, for I spent most of it with my boyfriend! (Stop dry heaving, please.)

The first weekend in April I flew to Dublin, where I attended my first-ever WWE show! Yes, I traveled with my guy to the 3 Arena to watch wrestling, and I had a blast. We were a tad disappointed that we missed Finn Bálor’s homecoming match (feckin’ traffic), but at least we caught Sheamus’s hilarious Ode to Irish Water Charges.

The photo doesn’t do it much justice, but we actually had great seats.

Afterwards, my boyfriend joined me on the flight back to the States, where we spent another two weeks together. That trip included a weekend getaway in New Hope, a family celebration for my grandparents’ 67th wedding anniversary, and an aimless walking tour of Manhattan.

That flight to the States together from Dublin Airport spoiled me; saying goodbye to my guy at the end of the month at JFK wasn’t easy. But it’s never easy saying goodbye, no matter where we are.

I was quite crafty in May.

My friends and I attended a paint-and-drink night at our former high school. It had been years since I touched acrylics, and I never had the greatest experience with painting due to a horrible art teacher. I overcame all of that and whipped up a nice summery piece, which I gave to my mom as an early Mother’s Day gift. 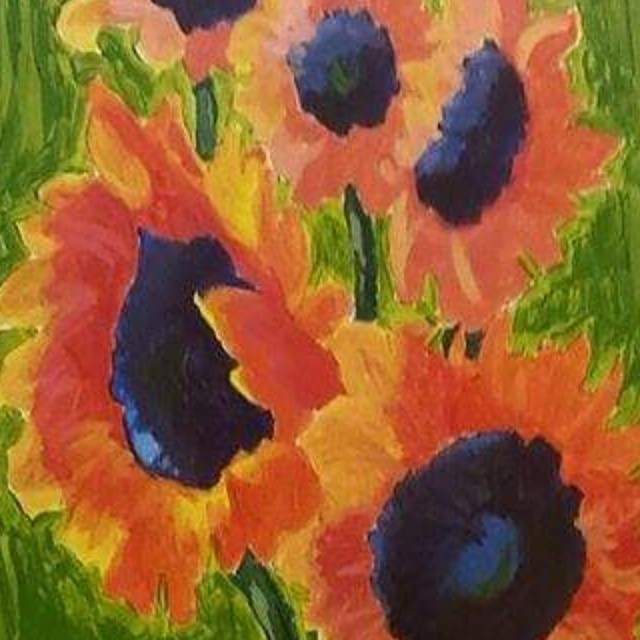 Not bad for someone who sucks at painting.

Riding that creative high, I challenged myself to attempt DIY cherry blossom jeans. Sure, Blake Lively paid around $500 for her designer pair; I paid under $50 to create my own. It was well worth it. I get a sense of satisfaction when telling those who are curious to know where I bought my jeans that I made them. 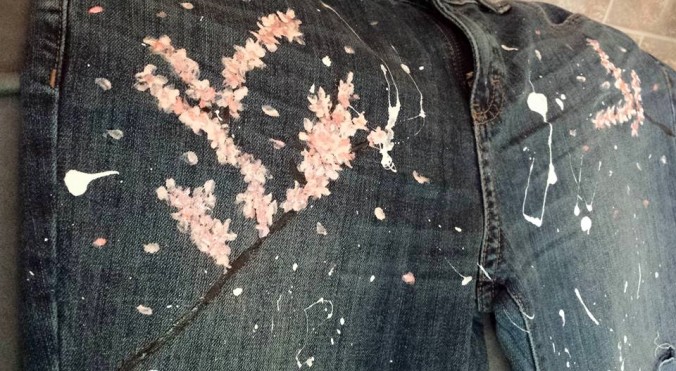 I’ll gladly make a pair for anyone who’s interested. No joke! Let me know.

I fell deeply into entertainment in May, too, binge-watching Silicon Valley, Fresh off the Boat, and Moone Boy. I even wrote about the experience.

June was a quiet month, but not uneventful, for better or worse.

In June, I spent a lot of time with friends. Looking back, I’m happy I did — I especially needed that time with them in order to keep myself sane.

I was still indulging in my entertainment binge, adding Bob’s Burgers and the third season of Orange is the New Black to my watch list.

The craftiness from May carried over into June, as I did my best to dress some cupcakes up karate-style for a friend’s black belt promotion party. 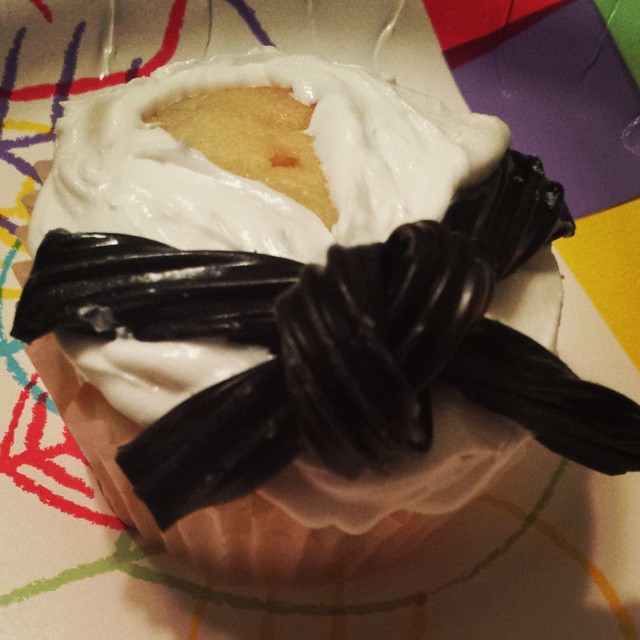 Twizzlers aren’t very pliable. Who knew? (I do, now.)

As for major news, the United States Supreme Court granted same-sex couples the right to marry in all 50 states. Here’s to love!

July. I didn’t very much care for July.

Okay, that’s a little unfair of me. Again, I spent much-needed time with friends and family, saw a new album drop from The Bird and the Bee after a 5-year hiatus, and discovered one of my all-time favorite shows in BoJack Horseman.

Oh, and at the end of the month, I flew back to Dublin. 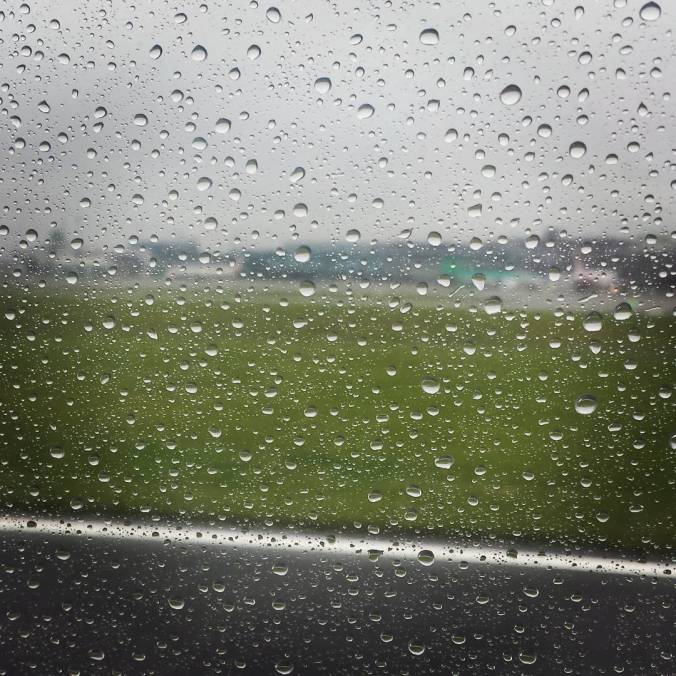 To the surprise of absolutely nobody, it was raining when I touched down.

Ah, yes, August. I liked August so much.

The month kicked off with a week-long holiday in Dublin, during which my boyfriend and I relaxed with a capital RELAXED. (And ate. We also ate. A lot.)

In between loafing and consuming, we visited the little-known (but everyone-must-go-see) Casino Marino, partook in the 1916 Freedom Tour (check it out, history buffs),  and introduced my boyfriend’s granny to an American delicacy called funnel cake. 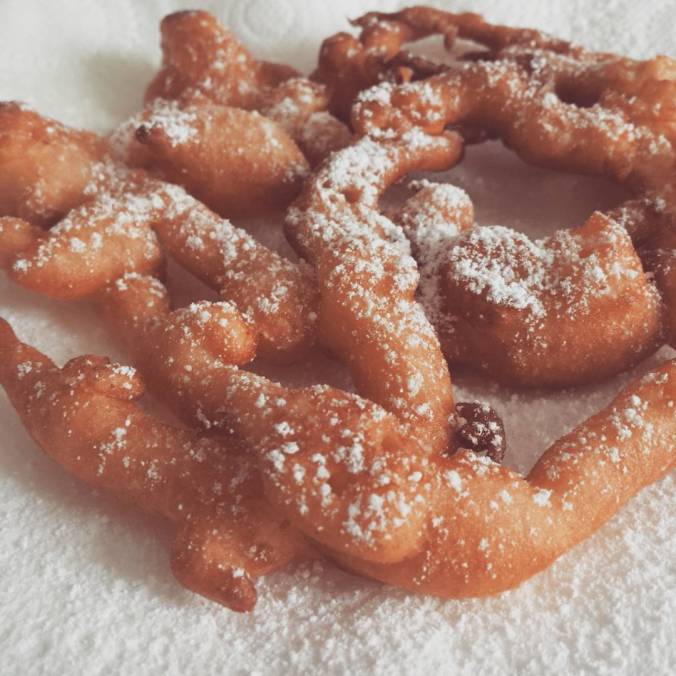 When I returned home, it was back to training hard in tang soo do, as blue belt was just a month away.

People usually cringe at the thought of September, the end of summer. Not me, and especially not this year.

This month saw so many birthdays and other happy occasions. It was time well spent with family.

I earned my blue belt in tang soo do, which officially makes me a cho dan bo, or “black belt candidate.” The next time I test for a new belt will be in June 2016 for that first dan. 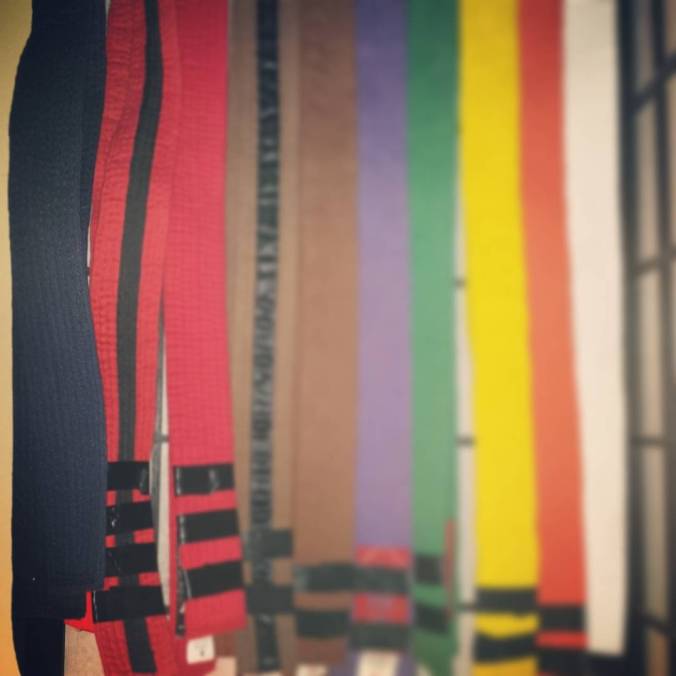 This is the result of nearly three years of hard work.

Soon after my belt ceremony, I traveled to Queens, NY to meet up with a certain Irishman who was flying to America for two weeks (and celebrating a birthday at the end of the month).

October was a busy month. That’s a good thing!

The mostly-pleasant weather arrived just in time for another short holiday. My boyfriend and I traveled back to New Hope and soaked in the splendor of a Bucks County autumn. 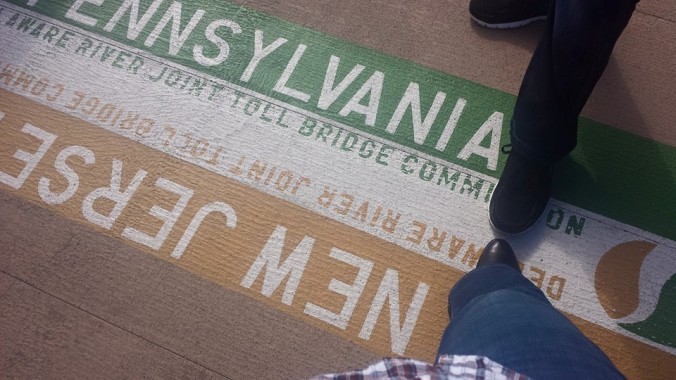 We also dealt with a much more manageable distance.

The Irishman and I went to another wrestling show. (Yes, I attended two WWE shows this year.) Joined by two of my wrestling-loving friends, the four of us saw WWE Smackdown live at the Wells Fargo Center. This time I had a better understanding of some of the storylines, which added to my overall enjoyment.

I saw one of my closest friends get married in October in a very beautiful ceremony. I also had the privilege of seeing one of my favorite musicians, Melody Gardot, perform at the Town Hall in New York City.

My boyfriend and I parted ways mid-month. It’d be the last time we’d see each other in 2015.

To keep myself from falling into a rut, I took advantage of as many Halloween festivities as I could. I joined friends on a couple of haunted hayrides, and accompanied my family on a walking ghost tour of Philadelphia on Halloween night.

Let’s see, what else did I accomplish in October…oh yes — I officially kicked off this blog!

I told you October was a busy month.

November was a blur. At least, it felt that way when it ended.

What did I do in November? I went to Peddler’s Village twice (once with friends, once with family), witnessed my favorite hockey player being honored by my hometown team, learned about my eating habits, and binged-watched Master of None in under 24 hours.

Oh, and I made apple roses, as made famous by the Internet. 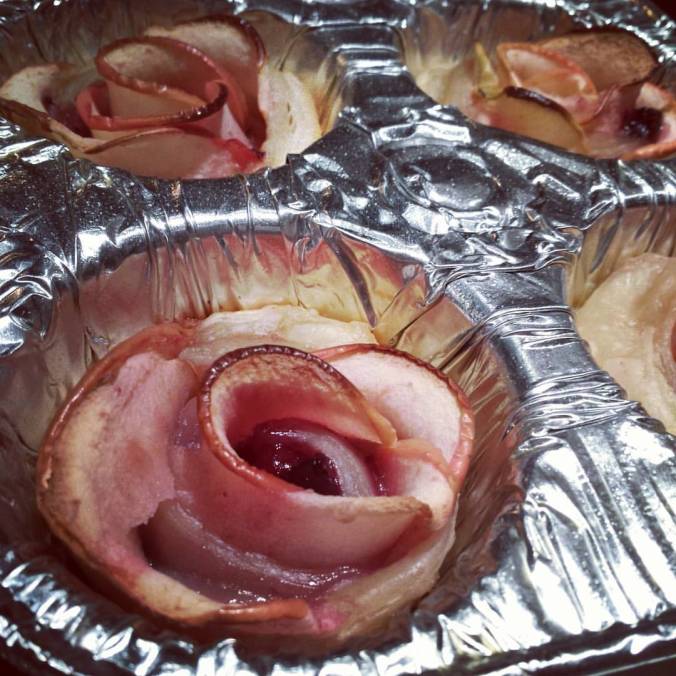 Yes, I know it looks like bacon. That’s an effect of using blackcurrant jam.

As much as I tried to get into the spirit, I was really dreading Christmas.

I had my reasons for feeling that way, and looking back they were silly reasons, as I ended up having one of the most enjoyable holidays to date.

Sure, the weather didn’t help matters. It’s hard to feel Christmassy when temps are in the low 70s and I’m walking around the Christmas Market in Center City Philadelphia wearing a sleeveless dress.

However, the unseasonably balmy weather didn’t take away from the wonderful celebrations I had with my family and closest friends. Spending time with them, I realize just how lucky I am to have them in my life.

As for my guy in Ireland? We were able to talk on the phone on Christmas Day. I don’t know if he understands just how much hearing his voice made my day. I miss him so much, and I hope we’re able to see each other again A-S-A-P-possible.

After having it laid out in front of me, I see that 2015 was far from a dud year. Yes, I did have goals. No, I didn’t meet all of them, which makes me a little disheartened. I had my low moments in addition to the highs, but let’s be honest — that’s every year. That’s life.

Should I let the negatives outweigh the positives? Should the disappointments hold more worth than my accomplishments? Should the people who wronged me outshine those who were nothing short of supportive and caring?

Friends, I think we know the answer to those questions. It’s all about perspective.

How was your 2015? If you’ve taken the time to reflect upon it, was it a better or worse year than you thought? Share your story in the comments.

Til next Monday…and next year!