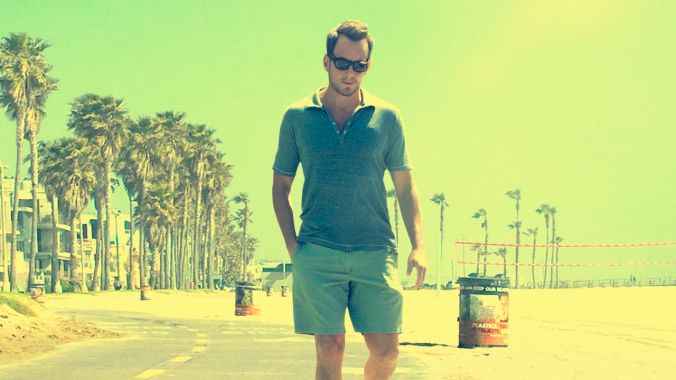 It’s quite rare that I leave a Netflix series unfinished. Fuller House has the dis-honor of being the first Netflix Original Series I’ve ever ditched.

Now I’m sad to announce that I’ve added another series to that Ditch List: Flaked. (Minor spoilers ahead.)

Flaked stars Will Arnett, who created the series alongside Mark Chappell (The Increasingly Poor Decisions of Todd Margaret). This review is based on the four episodes I managed to sit through. There are eight episodes.

Flaked is, in a word, bland. It’s like the comedy equivalent of oatmeal. Plain oatmeal. Not even a hit of spice to be detected. It’s dull and colorless.

The series follows Chip (Arnett), a reformed (but-not-really) alcoholic who lives as a “self-help guru”-cum-furniture store owner in Venice Beach, CA. He’s a pretentious asshole who uses people so he can make himself feel good. That’s…all I can really say about his character.

As for the rest of the cast?

Dennis (David Sullivan): Chip’s best friend and sort-of roommate. (Chip lives in Dennis’s mom’s old house, while Dennis lives in the guesthouse. No, I don’t know why, either.) He’s simple and seemingly kind, which — of course — means he’s perpetually screwed over by Chip, especially when it comes to the ladies. Dennis has women/mommy issues, due to his mother (Kirstie Alley, one of the lone bright spots of this show) being, erm, sexual.

London (Ruth Kearney):  A waitress and a love interest of Dennis’s, which means she’s also a love interest of Chip’s! London’s like a wafting paper bag, in that she lacks direction and any sort of defining traits. She also doesn’t have the best judgement, as she seems to be keen on Chip, despite him possessing zero redeeming qualities.

Kara (Lina Esco): A musician and Chip’s ex-girlfriend. I think. Were they ever officially together? He always treated her like crap. Plus, he’s about 20 years older than she is. You’ll be surprised to know that Dennis had a crush on Kara before Chip “swooped” in and made a move. Of no real relevance, she looks like Selena Gomez once she gets her hair cut.

Cooler (George Basil): A stoner-like guy trying to make it big in the comedy world. Like much of this show, he’s not funny.

A bunch of other characters who aren’t terribly memorable: Yup.

As I kept watching Flaked, I was hoping that, eventually, I would hit that tipping point, that moment when I would be eager to hit “play next episode.” That never came.

It was an effort for me to actually want to watch another episode of Flaked, which is not indicative of a good show. Save for a few scattered laughs, the comedy was drier than the Mojave. I didn’t care about the characters. I was merely observing these people and the things they did, and nothing more.

Flaked has brief shades of Love — which is a SoCal-based Netflix comedy I highly recommend — but unlike Love, Flaked isn’t very good at giving its despicable lead even a modicum of a redeeming quality. Sure, in Love, Mickey and Gus are terrible people, but the audience also gets to see more vulnerable and relatable sides to these characters. (Well, maybe Mickey moreso than Gus.) I can’t say the same for Chip. I have no reason to root for him, let alone want to follow a day in his life. The rest of the Flaked cast just seem to serve as accessories to Chip. Why would I care about them?

To continue the comparison, Love is generally more interesting and better-written. Flaked is all-over the place. I didn’t know what to focus on, or again, what/whom to care about. Love isn’t really much more neat-and-tidy, but at least I felt immersed in that universe. A large part of that, again, has to do with character development, which Flaked fails at in a big way.

I had high hopes for Flaked. I thought, maybe, it’d be similar to BoJack Horseman. The only things these two shows share in common are a lead actor and a streaming service. Flaked doesn’t even begin to hold a candle to my favorite self-destructive anthropomorphic horse. Despite Will Arnett’s involvement and Mitch Hurwitz (Arrested Development) executive producing, it’s a shock that Flaked tanked as badly as it did.

Take my advice: if you’re interested in watching a dark comedy about lovable assholes bumming around in SoCal, stream Love instead.

Is there a television show that you just couldn’t get into, despite your best efforts/initial enthusiasm? Share your stories in the comments below.