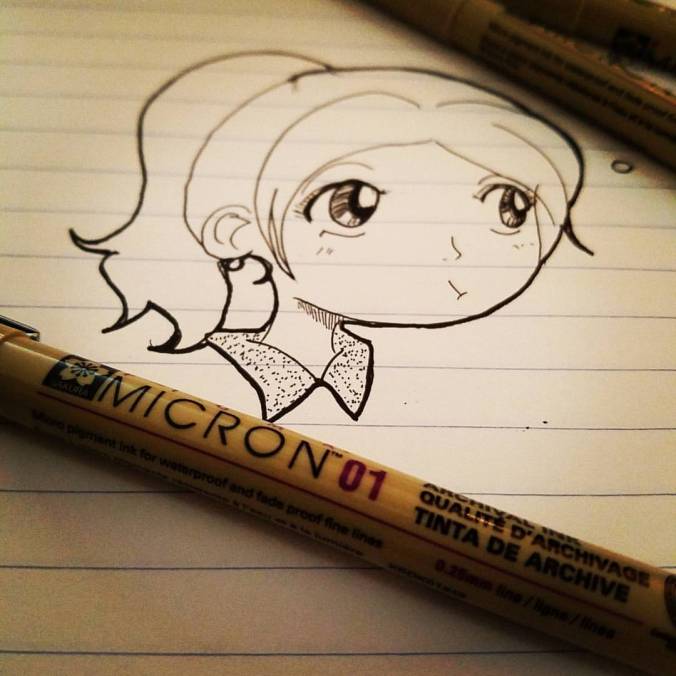 This is my first update in about three weeks. Am I proud of this? Nope. But ’tis what it is.

I can blame several things for this seemingly sudden drought of posts: laziness, busyness, boredom, frustration.

But I’m back, and in more ways than one.

The topic of this post isn’t merely referring to my writing, but rather, one of my first-ever loves: art.

When I was a child, I loved to draw. When I got into comic books — thanks for buying that issue of Betty & Veronica for me when I was a 6-year-old, mom — I decided I would create my own. I would take stacks of 8×11″ printer paper, fold them in half to create a book, and draw whatever came to my unusual mind. (My planning skills have marginally improved since my youth.)

Whenever anyone asked me what I wanted to be when I grew up, I said “cartoonist.” I wanted to create comics for a living. When I became a teenager and discovered anime and manga, I changed that answer to “manga artist.” Yeah, that was very weeb of me, but I was captivated by the detailed, monochrome pages of the series I dearly enjoyed: Ranma 1/2, Sailor Moon, Great Teacher Onizuka, and Chobits, to name a few.

I would sketch every day. Multiple pages. I’d mostly do pen-and-ink drawings, but sometimes I’d switch it up and just use a pencil, even though I would end up smearing the pages.

In high school, I was an art major. I had aspirations of going to art school after graduation, and achieving my goal of becoming a comic/manga artist.

When I was a teenager, I lacked three key things: a good teacher, confidence, and patience.

My high school art teacher was, and I am putting this as nicely as I possibly could after much internal filtering, God-friggin’-awful. While I could deal with her not approving of my anime-styled work (despite the fact that it helped me place in a few small local art competitions), I could never forgive her for pushing me out of my way and finishing my work for me, either because I was too slow or not doing it to her liking.

One incident in particular during my senior year, in which my teacher finished my acrylic painting after school one evening, left me paralyzed in tears. I had my strengths, but also my weaknesses, and painting was certainly a weakness for me. Being the “good girl” who didn’t want to rock the boat, however, I never spoke up about my teacher tampering with my work, and it bothered me for a very long time. She ended up giving me — well, the both of us — a B on the piece. I threw that painting away after graduation.

Perhaps the situation would have played out much differently had I possessed any confidence in myself, but as an awkward teenager, self esteem was always hard to come by, likely due to my desire to be perfect. An inconsiderate, sorry excuse for a teacher didn’t help matters.

And then there’s patience. Again, this was largely related to my perfectionist streak. If I couldn’t get something right, juuuuuust right, I’d ditch it and concede to whatever conquered me (perspective, painting, wood carving). I’ve become much more lenient in this regard as an adult, fortunately.

I didn’t go art school. My art teacher, upon reviewing my portfolio, suggested I attend a liberal arts school and take up another major while maybe minoring in art. It was her “nice” way of saying that I couldn’t or wouldn’t have a career in art. She wasn’t wrong because now I write and edit for a living, and as crushing as it was at the time, I think I fared well by going the LibArts route. (Was it ideal? Not exactly. But it could have been worse.)

In college, I majored in journalism while taking several art classes as electives. I had a balance of fine art and digital design. I enjoyed the classes, and had honest, competent instructors. At that point, art had become a hobby, albeit a waning one. Caught up with other goings-on, I stopped sketching in my free time. I’d dabble in things like PhotoShop and InDesign, but that was short-lived once I was out of school. I had committed myself to other interests and obligations. I wasn’t an artist anymore, in any sense of the word. I gave up on art in my early 20s.

About two weeks ago, I saw a deal on Sakura Micron Ink Pens at Amazon, a 6-pack for a decent price. Seeing those pens conjured fond memories of sketching in my bedroom, as I had quite the collection of Microns back then. I bought them on a nostalgic whim.

Holding one of those Sakura pens in my hand, the desire to doodle any random nonsense that came into my head immediately flowed back to me. I grabbed a small notepad and went right to it. It wasn’t long before drawing felt as natural and fun as it did when I was very young. However, I’m now several years wiser and much more patient. I’m still stumbling, and much of what I have drawn has been rough or very flawed. But I won’t let it stop me.

I want to make art a hobby again. In addition to my recent re-adoption of sketching, I’ve also done a few paint-and-drink nights in the last year and those have been moderately successful. I’m not only better at painting with acrylics, I also no longer have a feeling of dread every time I pick up a paintbrush.

The other night, I bought a proper sketchpad, drafting pencils, and a small set of Copic sketch markers. (I still have a 36-pack of Copics I received as a Christmas gift in the early 2000s and save a few of the pens I used most back then, they’ve really held up. They’re certainly worth the significant price tag.) It remains to be seen where I’ll go with my art as an adult. Maybe I’ll eventually realize that childhood dream and become a comic artist. Or I won’t. It doesn’t matter.

The only thing I really want from it this time around is a creative outlet. Anything else will be a bonus.

Great Wrestler Onizuka. It seemed like a good idea at the time. This is a rough version of something I hope to complete once I get more proper tools. The 15+ y/o Copics ain't too bad, though. #yeaoh #nakamurashinsuke #shinsukenakamura #greatteacheronizuka #kingofstrongstyle #fanart #copic #copicsketch #wwe #njpw #nxt #manga #anime #中邑真輔 #グレイトティチャー鬼塚

(One of my recent getting-back-into-this sketches, a cross between Great Teacher Onizuka and pro wrestler Shinsuke Nakamura. I’ll be posting more pieces on my Instagram, if you want to follow along.)

Is there a hobby you fell out of that you’d like to get back into? Share your stories in the comments below.